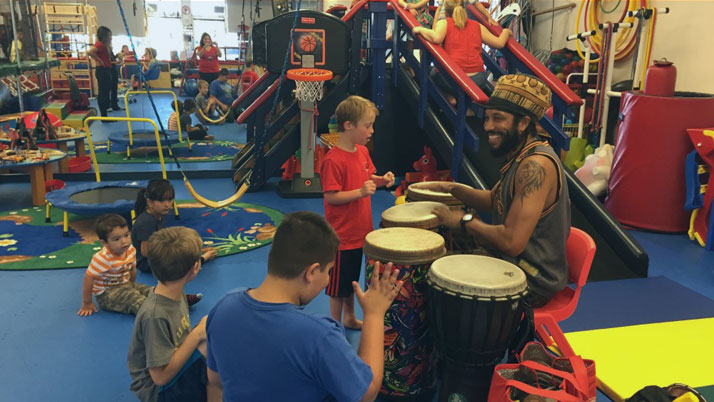 How Children Get the Most Out of Music Class: Special Needs & Neurotypical

The science of the effects music can have on a person has been proven over the history of mankind to be one of the most direct forms of stimulation and creativity.  Many who are musically inclined have been known to be highly intelligent, and their creative side has brought us amazing music, which brings forth feelings and emotions allowing us to understand the experience and journey of each score of music produced.

We must remember though that music is not just scientific and analytical, it’s emotional.  Music is one of the best tools for kids to use for growth and development, providing them with a creative outlet.  The benefit of music is not limited to one group of kids, but is fantastic for all kids.  Music helps to enrich the lives of everyone from adults to kids on the Autism Spectrum, as well as kids who are developing at a neurotypical rate.

In my case, I am fortunate enough to be married to a highly gifted musician.  My husband Tim, who is the Sound Supervisor of Game of Thrones, and who has previously worked on the sound and music of other well-known shows such as CSI: Miami, has the ability to play nearly every instrument you can imagine.

When our son, Gabriel, who is on the Autism Spectrum, was three and a half years old, we made the decision to purchase him a drum set.  I was blown away when Gabriel started playing.  He quickly heard what Tim played on his full-size drum set and mimicked the sounds on his own smaller version.  This was a major awakening moment for our family as we knew we needed to incorporate music in the lives of our children—both of whom have proven to be musically inclined.

WRTS Music at the Gym

Gabriel’s success was just one example of how children on the spectrum can be successful with music.  By incorporating music classes in our We Rock the Spectrum programs over the past year and a half, we have seen amazing transformations with many of the children in our gyms.  Children on the spectrum are able to pick up music easier than many other activities because they can learn by ear, and their great memories allow them to reproduce the music for themselves.  Even those children who are nonverbal can learn to play and repeat what they hear, giving them a fun outlet and a feeling of success.

The key to success for our music program has been Mr. Orlando and his drum circle.  Mr. Orlando has both the patience and tolerance to work with all kids in our gym.  Our inclusive philosophy allows us to have kids on all levels of development and Mr. Orland brings his smile, fantastic personality, bongos, and drums with him every time he visits the gym.  The kids love playing with him in his drum circle and are often asking when he will be by again to play with them.

They Can Do It

One of the challenges many parents face with their children is fear.  We tend to want to protect our children and hesitate allowing our kids to try new things—including music—for fear of failure and damaging their self-confidence.  We, as parents, often don’t give our kids the opportunities they deserve to try something new because of our own fears, but let them try.  Through the beauty of music they can take you on a journey of joy and celebration you never thought possible.

Too often as parents of children on the spectrum we see our children struggle doing something and then don’t try it again.  You have to go for it, you have to keep pushing them to try new things and find what they enjoy and can have success with.  My advice to parents who want to get their kids involved with music is to first start at home.  See what music they respond to and once you find the right fit, run with it.  If they don’t like the music you are playing for them, try something else.  There will certainly be some kind or genre of music that reaches them, but it’s up to you to find it.  Make music a part of your world at home and give your children the opportunity to expand their musical abilities through classes, concerts, and recitals.

What I have learned not only with Gabriel but also with my daughter Sophia, is that my kids are both musically inclined and enjoy the fun, the energy, and the feeling they get from listening to and playing music.  Nearly a year and a half ago we had another discovery with Gabriel.  While visiting my Mother-In-Law, who my children affectionately call Nana Pat, we heard music coming from another room.  Nana Pat has a piano in her home that has the letters of each note in the music booklets and on the keys of the piano.  Without a single piano lesson, Gabriel was playing the piano at his Nana’s house by matching up what was in the book to the keys on the piano.  In this instant my husband and I both knew we had to put him in piano classes.  The challenge that awaited us was finding the right class.

We found a piano teacher who welcomed all kids with the belief children on the spectrum can learn to play just as well as neurotypical children.  The proof of my children’s love for this program and for playing the piano has shown itself in many ways including their continued desire to attend class every Tuesday.  The proof of the progress and success came nine months into the piano lessons when it was time for the recital.

For the first six months of learning the piano, Gabriel had to play hand over hand because he was unable to spread his fingers to play the keys, making the recital an even greater accomplishment for him.  But during this recital, in front of a room of over 100 people, Gabriel played “I just can’t wait to be king” from The Lion King.  Not only did he play the song, he did so by himself and it was beautiful.  This was absolutely a glorious and euphoric moment for our entire family to see the progress my son made and the talent he has to share with the world.

As our journey has continued, both of my children have begun to add singing to their music.  Sophia has become quite a young talent.  She is now an eleven-year-old, working actress who is hired to do voiceovers for studios and loves the fun of this work.  For Gabriel, the inclusion of singing has given him a new gift.  Gabriel speaks with a stutter as many do.  Stuttering is anxiety based, but the beauty of signing is it relaxes the vocal chords, which removes the stutter.  When Gabriel sings there is no sign of the stutter in his voice.  His singing gives him a release that—for him—is similar to what many adults feel when they take the time to workout at the gym.  Not only is Gabriel now singing every chance he gets, at eight years old he has learned to read music, which is a task many adults have a difficulty learning.

This magical, musical journey my kids have taken me on has been amazing—from playing The Beatles music for them and listening to Gabriel mimic his dad on the drums to both of my children being talented and creative musicians in their own right.  Our house has turned into the house of music with our whole family playing Wii Dance and the kids playing on their instruments, which now includes a keyboard for the two of them to play and practice.

Through this journey—which has only begun—I have learned so much from my kids to share.  As parents we must keep trying, that is our commitment; we must keep trying for our kids until we find the right things that unlock their creativity.  And when we do persevere and provide our kids with these activities, it will build confidence, which helps on all levels.

The musical world is not just for kids on the spectrum, and it’s not just for kids who are neurotypical; it’s inclusive.  Sometimes it feels like music is more magic than science, and it can bring out a wonderful and beautiful side to every child.