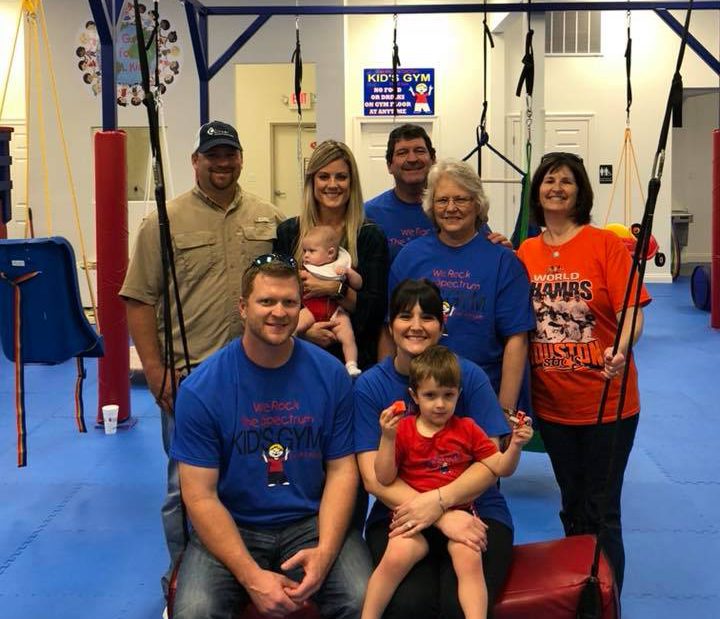 The proud owners of Lake Charles are Katy and Jason Miller. Katy and Jason have two beautiful children, Griffin and Nora! Both Children looked beyond happy with their parents’ new gym! Jason had a career in the oil and gas industry prior to moving back to Lake Charles from Texas after the birth of Griffin in 2014. Katy was then hired by The Diocese of Lake Charles to create the Progressions Program at The Immaculate Conception Cathedral School. After two years of getting the program up and running, she was able to go back to where it all started in Calcasieu Parish: St. John Elementary. Through teaching across different settings and environments, Katy realized no matter what abilities each student had, they all shared a common need; sensory input. When working for The Diocese of Lake Charles, Katy saw a huge need for inclusion of all children as well as a better understanding of our kiddos that are on the spectrum. This led her to write a book called “Under the Umbrella: Sam’s Sister”. Soon after, a special education teacher in Texas named Jill Johnson heard about this book and wanted to put it in her kid’s gym, We Rock the Spectrum – Houston/Memorial. Once Katy read all about the gym, she realized she just HAD to bring one to her community!

Fast forward to this past Saturday, December 2nd, 2017 which kicked off the beginning of We Rock the Spectrum – Lake Charles, and we could not have asked for a more incredible grand opening! Children and parents were all smiling alike and tons of fun was shared by everyone who came by! We had Patrice and Grace from We Rock Corporate fly out and make sure everything was smooth sailing for Lake Charles. The staff and volunteers Lake Charles had took the reigns and did an amazing job, almost as if they have been doing this forever! They had an overwhelming amount of support from the following businesses who provided amazing donations; Mimosa, Sercy Lane, Ally Gator Bookbites, Market Basket, Cypi’s Cupcakes, Starbucks, Pronia’s, O’Niell’s, Stone Fired Pizza, Darrel’s, Nina P’s, Cousin’s, Olive Garden, O’Charley’s, Dickey’s, Raisin’ Canes, and Adam Kilgore for cooking an amazing jambalaya!