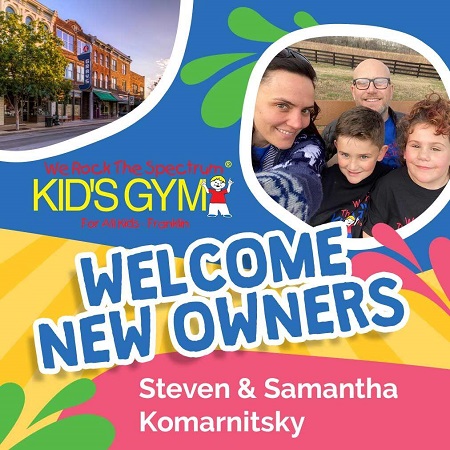 A local family is helping to make Williamson County a more inclusive community by creating a recreational space for children and young adults of all abilities.

Steven and Samantha Komarnitsky moved to Franklin six months ago with plans to bring along the We Rock the Spectrum franchise — an inclusive children’s gym and recreational facility with roughly 90 locations in eight countries and 24 states. This will be the first in Tennessee and will fill a great need for spaces that accommodate families who have typically developed children and children with an intellectual or developmental disability.

“There’s a big problem everywhere; there are rarely places where you as a family unit can take your kids or kid and feel safe and (welcome) and never have to apologize,” Steven Komarnitsky said.

He shared that he and his wife discovered We Rock the Spectrum in their former home city of Los Angeles, and it was immensely helpful to them during the pandemic because the business was deemed essential and remained open.

As he and his wife both worked from home during the pandemic, it was difficult to care for their 8-year-old son, Nash, who was diagnosed with autism spectrum disorder at 4, when he was finished with his virtual school for the day. Komarnitsky shared that he could drop Nash off at We Rock for respite care — which the business calls “Rock Care” — for a few hours to help everyone in the family round out the day.

One goal of the gym is to promote physical, emotional and social development by activating the seven senses. This includes the basic five — sight, smell, taste, hearing and touch — in addition to the vestibular sense, which is the response to movement and balance, and proprioception, which relates to position and is activated by push and pull activities, such as clapping.

We Rock the Spectrum not only accomplishes this goal with its jungle gym equipment, including crash pits, zip lines, hammock swings, carpet swings, climbing structures and more, but each facility also offers classes and activities for children and young adults.

Komarnitsky said he hopes to start out with music, dance and yoga with some special courses as well. As the business grows, he’s considering activities like karate and story time with therapy animals as well. And when a child is finished with a class, they are free to play in the gym until they’re ready to go home.

He emphasized that, while We Rock is inclusive of those with disabilities, it is created for everyone. He shared that there were days that his son wouldn’t be in the mood to go to the gym, but his neurotypical daughter Colette would go by herself to play with other kids in a positive environment that teaches children to appreciate diversity of ability or of any other characteristic.

“It’s all inclusive, so nobody’s judging that you can’t go on the zip line as fast,” Komarnitsky said. “We really try and accommodate at your own speed, at your own pace, at your own comfort level without ever having to feel people are judging you or you’re having to apologize because you’re taking longer.”

He shared that the facility will include a calming room, where children and families can go if they feel overwhelmed, and he and his wife will both soon be certified registered behavior technicians, adding another layer of support and security to the environment. Additionally, he said plans to hire staff members with an interest in pursuing a career in child development, occupational therapy, physical therapy, special education and other related paths.

As he finalizes the process of securing a location for the gym, Komarnitsky said that he is immersing himself in the community and looking for ways to support the people, nonprofits and businesses already doing work in this sphere “so that they can benefit from the gym itself and to know that we’re a partner.” He also wants people whose kids may play at the gym to know his face.

“It (is) important for us to be in the community, … especially for this type of place, right?” he said. “When we would drop Nash off or Coco at the place, I knew the owner by name. I had her cell phone on speed dial. I knew her kids by name. I knew the staff. … They would give me reports when I would pick the kids up: how did he do? Did he play? Was he in a mood?”

He shared that We Rock the Spectrum Franklin will open in the fall or early winter of this year before the holidays. To learn more, visit WeRockTheSpectrumFranklin.com.