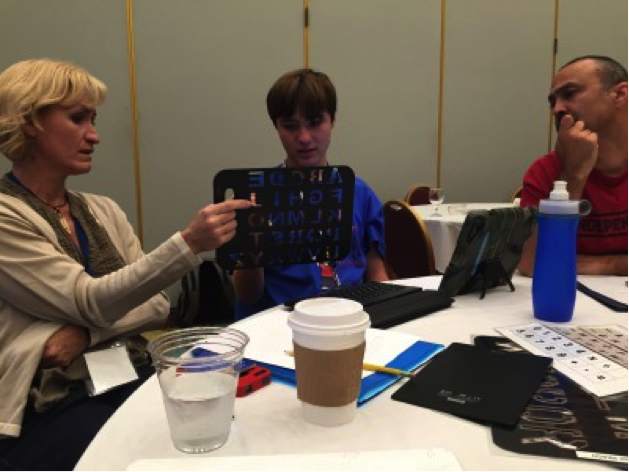 One method that has proven to be successful in recent years is the Rapid Prompting Method (RPM). Developed in India by Soma Mukhopadhyay for her son, RPM has grown to have a worldwide following for its breakthrough with children and adults with severe autism — including some of our gym owners and their children.

What is the Rapid Prompting Method?

RPM involves constant, fast-paced questioning accompanied by an alphabet board that the students point to in order to spell out their answers. Over time, the students respond quicker and the curriculum and complexity of the questions advance. Therapists and parents speak highly of how it encourages better communication across the board. Some individuals with autism who before could barely even communicate are now sharing their own thoughts and even poems.

Since its development, Soma has come to the United States to teach RPM out of her clinic in Austin, Texas. The non-profit, HALO (Helping Autism through Learning and Outreach), offers a rundown of the methodology, books and guidelines for parents, as well as many success stories.

Among one of those stories is that of EJ, the son of We Rock the Spectrum – Whittier owner, Sabrina Lu. EJ was completely nonverbal at the start of his RPM journey in late 2015. Sabrina sought out the method due to the lack of services available in the nonverbal community. Since then, she has attended RPM development conferences around the country and has seen EJ grow in his ability to communicate. EJ is now at grade-level curriculum, learning about subjects that interest him, and he has acquired a gift for poetry.

On the We Rock the Spectrum – Whittier blog, Sabrina documents EJ’s journey.

Deb Portnoy, the owner of We Rock the Spectrum – Glendale, has a son who also had an amazing journey with RPM. Harry, Deb’s son, had no way of communicating what he knew, what he was interested in, and what he wanted to do in life. Deb said that she would often worry about his future.

With the help of his therapist, Katie, who was trained in RPM, Harry started to get comfortable communicating through the RPM alphabet board method and typing on his iPad. Eventually, Harry began to type and express his interests in a multitude of subjects including ancient China, the U.S. presidents, science, and running.

Here are some excerpts from Deb’s blog series He Rocks – Harry’s Heart and Humor:

“Katie asked what he wanted to work on.

Harry typed, ‘longing to do the great wall.’”

“Katie asked him to type out the number 22.

Deb says, “It was not everyday, or even every time I asked, but his communication was improving. It was still extremely limited but significant.”

Since then, Harry has continued to progress greatly in his communication.

Some speculation exists within the special needs community about the effectiveness and validity of RPM, but what we learn from EJ and Harry’s stories is that you never know what you can inspire in a child until you try. Every child’s journey is different. Sabrina says that despite knowing that RPM hasn’t been scientifically tried for its effectiveness and might not work for everyone, she and EJ just had to take that leap of faith.

EJ and Harry aren’t alone. A simple Google search will point to many cases of parents all around the world who are using the Rapid Prompting Method and achieving breakthroughs that they previously never thought were possible.