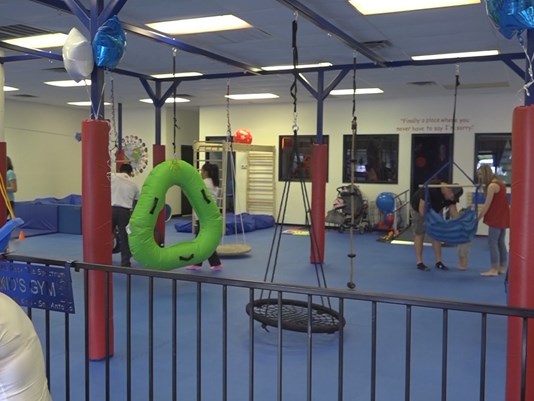 SAN ANTONIO – Rebecca Reveles-Jones moved to San Antonio because of her husband’s career in the Army. She noticed that her 18-month-old son started acting differently when her husband got deployed overseas for a year.

“I thought that was the reason he stopped talking and making eye contact and stopped socializing,” she said.

She later learned, after a lengthy evaluation, that her son was on the autism spectrum. She said that because he is nonverbal, it makes it difficult for her to know what he needs. And because socialization can be a challenge for kids with autism, it can be difficult for her now-2-year-old son, Antonio, to make friends.

She added that being a parent of a child with autism can feel very isolating at times.

“As a parent, if you’re out in a normal setting, other parents look at you,” she noted. “They’re like, ‘Why aren’t you controlling your child?’ That’s how he is, it’s not his fault.

That’s when she heard about We Rock the Spectrum Gym. The San Antonio area branch opened its doors on Saturday and is specially equipped with toys and gym equipment for kids on the spectrum. The gym will also have classes like yoga and drumming. Parents can pay to bring their kids for the day or sign up for a monthly membership.