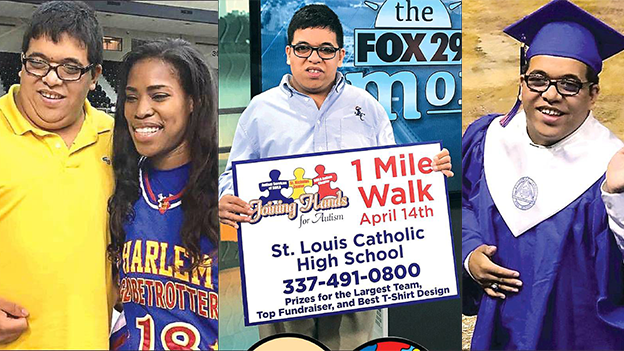 Families and friends whose lives have been impacted by autism are invited to join together April 14 and participate in the annual Joining Hands for Autism Awareness Walk.

The one mile walk will begin at 9 a.m. Saturday, with registration beginning at 7 a.m., at St. Louis Catholic High School located at 1620 Bank St. in Lake Charles.

This year’s event will be the third in a row for Will Malone and his mother, Kat Landry, and his first year to have his very own team participate in the walk.

“We look forward to this event every year and this year we have a lot of family and friends joining us, so it’s going to be a really fun time,” Landry stated.

Landry recalled the moment when her son received his diagnosis that placed him on the autism spectrum shortly after he was 5 years old.

“It was scary, it was a really tough time at first,” she stated. “He struggled a lot with ADHD. School was difficult and I never really felt that I got that school experience that other parents did because we never truly got a grasp of it in those early years. I felt very isolated.”

Then, Landry said she discovered the Autism Society. She said the services her son received through the organization turned their lives around.

“It took me a long time to not feel scared, but through the Autism Society we began to feel included in the community and gradually it became not so scary anymore,” she stated.

Landry said that over the years, she began to see the entire community begin to focus on inclusion. In the early years, she said even attending church services with her son could be a difficult task at times, but now she said that has been helped through her church and others offering special needs mass every few weeks.

“It’s so amazing and helpful to see so many aspects of the community embracing my son. He loves people and has never met a stranger, and it’s wonderful to see how much he enjoys putting a smile on people’s faces.”

Now at 19, Will has made a job for himself volunteering at the We Rock the Spectrum gym, and Landry said that she knows when the time is right for him that he will be able to live some sense of an independent life when he moves into the housing units offered by Autism Services of Southwest Louisiana for individuals with special needs.