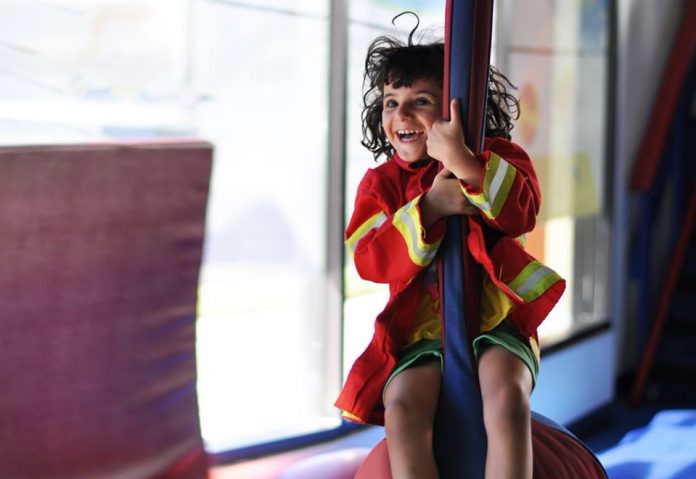 Gym for children with special needs changes hands in Williamsburg

A gym in Williamsburg designed for children with special needs has changed hands, and will host its “grand re-opening” on Saturday.

We Rock the Spectrum — an indoor gym with 10 sensory-safe pieces of play equipment for children with autism, special needs and neurotypical development — will celebrate the re-opening Saturday, April 6 from 10 a.m. to 5 p.m. at its facility, 5251 John Tyler Highway, Suite 2, according to a news release from the gym.

The event is open to the public. Admission will be $12, 20 percent of which goes to the My Brother Rocks the Spectrum Foundation.

We Rock the Spectrum is part of an international gym franchise opened by a Californian mother in 2010. The franchise in Williamsburg was opened in 2017 by Lena and Mike White.

The gym has equipment designed to help children with sensory processing issues, a common issue children on the autism spectrum face. The gym has a zipline, trampolines, swings and more.

On Feb. 21, the White family announced they were leaving their “beloved gym,” and a new owner would be taking over.

“We love the gym we have built and are proud to have brought it not only to Williamsburg, but to have been the first family ever to have opened a We Rock location in all of Virginia as well,” the family wrote in the post.

The following day, the gym Facebook page announced Kimberly Moore, a Williamsburg native who has a 7-year-old son on the autism spectrum, as the new owner.

Moore and her son, Aiden, were customers at the gym before Moore became the new owner.

Moore has a degree from Christopher Newport University in psychology and worked for 12 years managing two local hotels for Colonial Hospitality.

Customers and potential customers can meet Moore and Aiden during the re-opening event.

“We Rock the Spectrum is not just a kids gym. It’s a place that your child can discover, learn and play, in their own way and at their own pace,” Moore said. “It’s a place where parents can come together and talk about the struggles, the challenge of finding adequate services, and the developmental breakthroughs. It’s a place that you can drop off your little one for a few hours and have the peace of mind that the person watching your child understands them.”