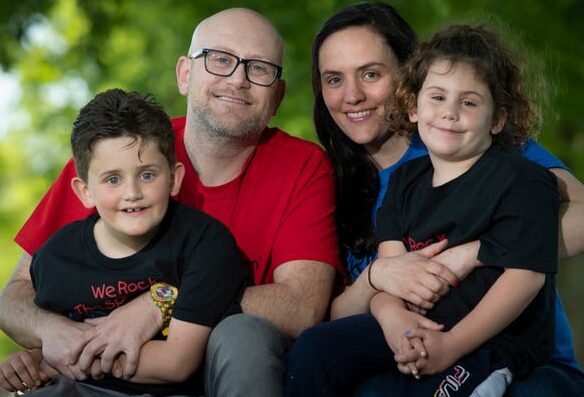 A gymnasium for kids of all abilities, one where parents and children never have to apologize for who they are, will open its doors in Franklin later this year.

The gym will be Tennessee’s first franchise of We Rock the Spectrum and the first of its kind in the state. We Rock is an international brand of gymnasiums geared toward children of all mental and physical abilities.

Steven Komarnitsky and his wife, Samantha, recently moved to Williamson County from Los Angeles and were eager to embed themselves in their Middle Tennessee community. Their neighborhood We Rock in Southern California was an escape for them and their children — 5-year-old CoCo and 7-year-old Nash, who has autism — and now they are bringing the franchise to their new home.

“This is a really important community destination,” Komarnitsky said.

Nash was diagnosed with autism spectrum disorder when he was 4 years old, and in the years since his diagnosis, his parents have turned to We Rock as a way for their son to thrive, play and make friends in a welcoming environment. CoCo joined her brother for his outings.

And while there has been a recent push for activities for all children, like inclusive playgrounds that have popped up across the Midstate with one planned for Brentwood in 2022, an entire indoor facility dedicated to playtime doesn’t exist in the state.

“We just want the folks to know that we’re bringing a place that all kids and young adults with any type of ability can come and feel safe and included and never have to say ‘I’m sorry’ for whatever reason,” Komarnitsky said. “We’re here to bring something that has a purpose.”

Facilities offer 12 pieces of therapeutic equipment that help with sensory processing, like a zip line with vestibular sensations.

Children of all ages and conditions have a place at We Rock, and the facility offers respite and break time care for families who need to step away for a break. For children who require a higher level of care, one-to-one attendant care is available.

The gym offers everything from open play, during which kids have full use of the facility, to field trips for classes and birthday party rentals. A variety of children’s classes will be offered, including yoga, music and dance.

Komarnitsky said their gym may even offer a big brother and sister type program, in which an older teen or young adult would be paired with a child.

After the launch of the Franklin location, they hope to later expand to Nashville and across Tennessee.